Rights of Man, Billy Budd and an 1843 Albion press 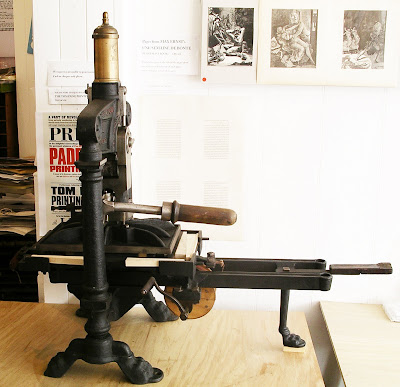 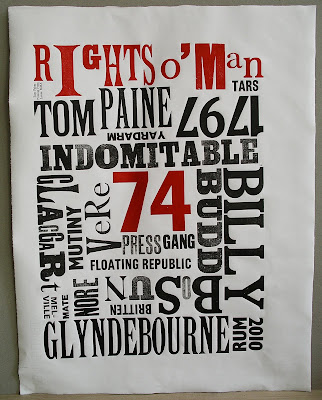 I've printed a new typographical poster 'Rights o' Man' (Budd's merchant ship, named after Tom Paine's 1791-2 seminal work) before he was pressed into HMS Indomitable (a name which did not appear in Herman Melville's original story). to mark the terrific new production of Benjamin Britten's Billy Budd at Glyndebourne. I printed this poster before I attended the dress rehearsal, and, even so, wouldn't want to change it much. But my posters have a habit of transmuting within short periods of time! So within an edition of, say, 50 posters there could actually be several different printing states. The one shown above does not have the red stars by Captain Vere's name ('Starry Vere') which appear in a slightly later state.

I've just taken delivery of a small 1843 Albion press (see photo above), constructed in the sixth year of Queen Victoria's reign, which I will be able to use for printing broadsides, woodblocks and other relief work. I haven't measured the platen yet, but it can print foolscap (bigger than A4). This is now installed on a stout table in the Press at 151 High Street, Lewes, along with the big common press (which, of course, sits on the floor).

Just got back from Toronto, where I visited the very friendly and interesting Coach House Press (two Heidelbergs), and also Don Black's amazing letterpress warehouse. There's an interesting exhibition relating to the Coach House Press and its work since 1970 in the Art Gallery of Ontario (AGO) in Toronto. This is a wonderful gallery and, quite apart from lots of great art (including Rembrandt etchings at present), there's a fine collection of model ships in the basement. If you're interested in naval architecture (Billly Budd, Wooden Walls, Hearts of Oak, etc.) this is well worth a long look.
Posted by peter chasseaud at 13:18 No comments: 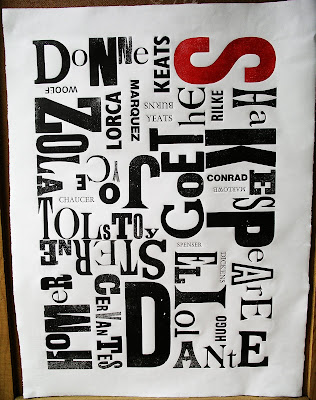 This is my new 'writers and poets' letterpress poster, printed in a similar way to the previous two ('political philosphers' and 'artists') using a combination of wood letter and metal type.

I shall be showing all these posters, and more, at the Antiquarian Book Fair at Olympia (London) in June, at the Whitechapel Art Book Fair in September, and the fine press fair at St Bride Printing Library in (I think) November this year.
Posted by peter chasseaud at 08:16 No comments: 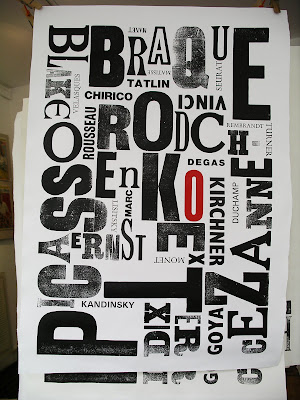 Here is an image of my new 'Artists' typographical poster, similar in style to the 'Political Philosophers' poster I printed recently (see previous post). This is the second in this series of limited edition posters.
Posted by peter chasseaud at 09:29 No comments: 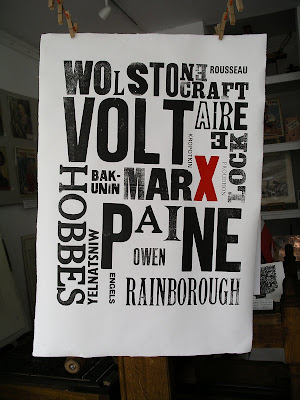 This is a proof of a new 'Political Philosophers' poster I've been printing yesterday and today on the common press. The type ranges from 36 point metal type (smallest) up to 38 Line Pica (over 6 inches) wood letter (largest). There is a free poster prize for identifying the (Russian?) philosopher Yelnatsniw!

In the production copies, Wollstonecraft has two 'L's, and there a few other changes. Hegel appears, inverted above Marx (any guesses why?). Hobbes has disappeared, and Lilburne has been added. I would have added more and more names, but ran out of space. I could fit more in (Plato, Aristotle, de Beauvoir . . . ) but would have to use smaller and smaller type, which defeats the object. Less is more?

I hope to produce more posters in this series - Artist, Poets, Printers, etc.
Posted by peter chasseaud at 14:58 1 comment: