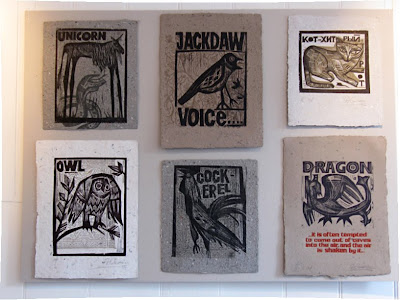 Exhibition of prints and books by Dmitry Sayenko 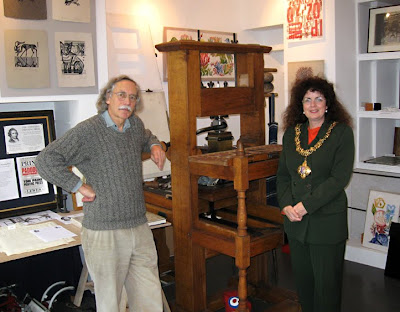 Again, what a hectic few weeks it's been! The Tom Paine Printing Press was officially opened in early December in its new premises at 151 High Street, Lewes (opposite the Bull House and Westgate Chapel), by Amanda Dean, the Mayor of Lewes. This is a perfect location, as Tom paine lived and worked in Bull House, and was married to Elizabeth Ollive in the Westgate Chapel, the marriage being legalised at St Michael's Church - only a stone's throw away. So we have three Tom Paine sites close by, and the White Hart, where Paine attended Headstrong Club meetings, just down the High Street. And of course there's also the bowling green at the Castle, where Paine played bowls with William Lee, who printed his pamphlet 'The Case of the Officers of Excise'.

The Printing Press now has a shop and gallery (Press Gallery) on the premises as part of its operations, the idea being that these will generate income to support the press. We are selling a range of, mostly printed, items related to Tom paine, and also small press books, artists' books, and hand-made prints (etchings, woodcuts, collagraphs, linocuts, lithographs), cards, etc.

The first exhibition (see photo at top) was of prints and artist's books by the Russian artist Dmitry Sayenko, from St Petersburg. He produces very powerful woodcut and linocut images, often combining them with typeset text, or with text which he cuts by hand into the block.
Posted by peter chasseaud at 12:27 No comments: