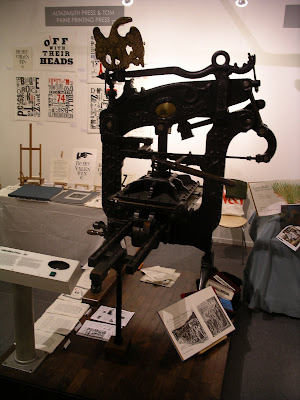 This Columbian Press, in front of my stand at the Watercolours and Works on Paper Fair, is unfortunately not part of The Tom Paine Printing Press's stable of presses! It's the last remaining press in the Science Museum's old printing gallery on the second floor. All the others have been moved out and put in store.

Printing is getting a rough deal from museums in London: no printing gallery any more at the Science Museum, the Type Museum closed indefinitely for lack of funds, the British Library printing gallery closed and its wooden 'common press' relegated to a corner outside the lavatories, and the display at St Bride not open to the public on a regular basis. The Science Museum in particular has no excuse, as it has huge amounts of under-utilised space. It's a great shame that museums seem to have abdicated any reponsibility they may once have felt to cherish our material culture (i.e. things and stuff) and to display and interpret them for the present and future generations. They seem to believe more in empty spaces (remind you of art galleries? Think Tate Modern's Turbine Hall as the classic example), which can be used for outside events and corporate entertaining. If the stuff isn't there on display, it can't feed and stimulate young imaginations. I remember when the Science and other museums were 'mathom houses' chock-full of magical things, and the wonderful effect this had on me and on others. Now they only show a tithe of their original displays. Philistines indeed! Trahaison des clercs.
Posted by peter chasseaud at 14:25